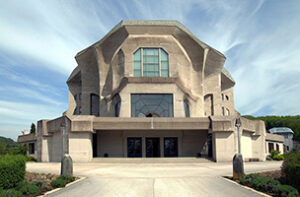 The Goetheanum in Dornach, Switzerland
Headquarters of the General Anthroposophical society, the worldwide organization to spread Rudolf Steiner’s work.
Website

Anthromedia
Website
News, essential information and in-depth articles on anthroposophy and the many social initiatives arising from it.

RSF provides opportunities for people to align their investing and giving with their values and connects social entrepreneurs with diverse forms of capital. RSF believes that people are served best by long-term financial relationships that are direct, transparent and personal. These relationships build the foundation for trust and collaboration to emerge, leading to long-term social, economic, and ecological benefit.

Since 1984, RSF has made over $450 million in loans, grants, and investments supporting social enterprises in the areas of food & agriculture, education & the arts, and ecological stewardship.

“By the end of the 20th century it will be necessary to have overcome naiveté and illusion and have developed occult discrimination. No spiritual growth occurs until one stops blaming others for their problems.” – Z.V. Emmichoven

The Association of Waldorf Schools of North America

The aim of the Physicians’ Association for Anthroposophic Medicine (PAAM) aim is to facilitate personal contact and the exchange of knowledge between anthroposophic physicians, and with other health practitioners.

BiographyDr. Gopi Krishna Vijaya is from Bangalore, India. He has completed his undergraduate physics training from the Indian Institute of Technology Kanpur (India), and his PhD in Physics (Solar Energy) from the University of Houston in 2014. He is currently engaged in the Postdoctoral Research of the Reciprocal System of Physics – a way to inculcate Goethean thought into modern physics – in Salt Lake City, USA.

His work spans several subjects and is mainly focused on their connection to spiritual science. Some samples of his work include:

Projective Geometry and its significance in Architecture (2-day workshop)

What is India? (On the Threefold nature of the Indian subcontinent, published online)

Living nature of Liberty (study of ideas behind Libertarianism)

Several papers in Physics with regard to Goethean Science, foundations of astronomy, calculus, and the Reciprocal System of physics theory. (available online)

In the natural scientific domain, he has been the author of 13 journal publications in experimental and theoretical semiconductor physics, presented his work in multiple international conferences (IEEEPVSC, SPIE etc.), served as a research mentor for a number of students.

History of Technology
Watch Video
Technology does not crop up from mere utility, but it is drawn out systematically from the human organism, step by step. A description of this relationship from Ancient Greece to modern day.

Computing Technology and Thinking
Watch Video
Discussion of the origin of computing, and its relationship to thought in general. Restrictions of Boolean algebra, and the relation between this algebra and mechanical/economic realities.

Grasping Technology through Thought
Watch Video
Rediscovering the thought process that is needed to handle technology. The different realms of human, animal, plant and mineral, and where the technological revolution fits in. Observing inner changes due to using technology that one needs to first recognize, then offset.

Moving Forward; In-reach
Watch Video
A path for further research of putting technology on a moral basis. Researchers who have worked in this field, and their contributions. References for material that need to be studied and pursued in order to take this forward. Internal exercises.

Short Summary video of conference
Watch Video
A short summary video of all the activities in the conference, including the watch workshop and domino exercises, coupled with reflections from participants.

Technology and the Laws of Thought by Dr. Gopi Vijaya

In Bruce Greyson’s paper, “Implications of Near-Death Experiences for a Post-Materialist Psychology,” he states that, “A number of reductionist hypotheses have been proposed to explain NDEs (near-death-experiences)… although (such) speculations generally lack any empirical support and address only selected aspects of the phenomena.” (See paper by Enrico Facco and Christian Agrillo entitled “Near Death Experiences Between Science and Prejudice.”**)

Greyson says, “The most important objection to the adequacy of all reductionist theories, however, is that mental clarity, vivid sensory imagery, a clear memory of the experience, and a conviction that the experience seemed more real than ordinary consciousness are the norms for NDEs, even when they occur in conditions of drastically altered cerebral physiology under which the reductionist model would deem consciousness impossible.”